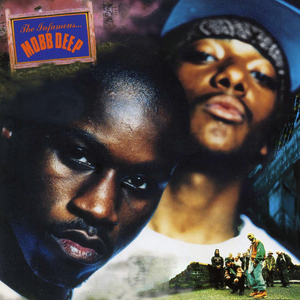 Although they are now considered a legendary group, leading into the release of their second album, The Infamous, it was far from a given that Albert “Prodigy” Johnson and Kejuan “Havoc” Muchita would enjoy such long and fruitful careers. Their first album, Juvenile Hell, had been a commercial flop, although it did yield a minor hit, “Hit It From The Back,” and led to them being dropped by their first label, 4th & Broadway. Prodigy even admits in his new autobiography, My Infamous Life, that him and Havoc didn’t really take the songwriting and producing process serious for their debut. It’s understandable given that both were teenagers at the time. Besides, if it was the impetus for what was to come, then it was definitely a good thing. While only producing three songs on Juvenile Hell, the group produced a majority of The infamous, carving out a unique and unmistakable sound. Dark, moody, brooding, and sinister, the music was apocalyptic and Havoc and Prodigy’s unyielding and unremorseful lyrics painted a very bleak picture of what life was like growing up in Queensbridge (yeah, we know Prodigy is from Hempstead, Long Island, but it’s obvious he spent a lot of time in QB). It may have been unnerving to think that a duo so young could entertain such cold-blooded thoughts, but given the overwhelmingly positive response, the realness seemed to resonate. The album contained huge smashes with “Shook Ones, Pt. II,” and “Survival Of The Fittest,” and disseminated their unique dunn slanguage all over the world User-contributed text is available under the Creative Commons By-SA License; additional terms may apply.