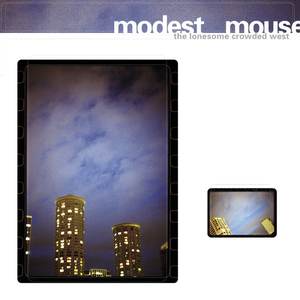 The Lonesome Crowded West is the third album recorded by indie rock band Modest Mouse (the second released, but Sad Sappy Sucker was recorded before The Lonesome Crowded West and This Is a Long Drive for Someone with Nothing to Think About). The album was released on Up Records on November 18, 1997, on both compact disc and vinyl LP. Many consider the album to be one of the best indie rock albums of the 90s: Pitchfork Media ranked it #29 in their list 100 Greatest Albums of the 1990s, and the song "Trailer Trash" number 63 in their list of the 200 Greatest Songs of the decade. Spin ranked it #59 in their list the 100 Greatest Albums, 1985–2005, and Entertainment Weekly included the album in their list The Indie Rock 25. The A.V. Club has described the album as the band's breakthrough recording. The two towers that adorn the album's cover are The Westin Seattle Hotel. User-contributed text is available under the Creative Commons By-SA License; additional terms may apply.