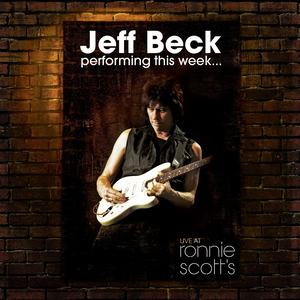 Anyone who caught Jeff Beck's set at Eric Clapton's 2007 Crossroads Guitar Festival (or even the two-song DVD excerpt) was probably salivating at the hope that an entire performance with the same band would appear on CD and DVD. This is it, 72 minutes and 16 tracks compiled from a week of shows at the U.K.'s famed Ronnie Scott's, and it's as impressive as any Beck fan would expect. The guitarist's last official U.S.-released live disc was from his 1976 Wired tour (an authorized "bootleg" of his 2006 tour with bassist Pino Palladino is available at gigs and online; others pop up as expensive imports), making the appearance of this music from just over three decades later a long-awaited, much-anticipated event. Only one track, the frenzied "Scatterbrain," is repeated here from the 1976 album, but with an entirely different, and arguably more sympathetic, band backing him along with a far longer playing time, this disc is the stronger of the two. Veteran drummer Vinnie Colaiuta nimbly keeps the beat, Jason Rebello's keyboards aren't nearly as intrusive as Jan Hammer's, and young bassist Tal Wilkenfeld's rubbery lines both underpin and, in the case of "Cause We've Ended as Lovers," take the lead when called on with vibrant proficiency and a sure sense of the bottom end needed for Beck's excursions into funk, fusion, reggae, jazz, and rock. The entirely instrumental concert focuses predominantly where you'd expect it to -- on Beck's innovative leads as he tears into his catalog of fusion fare, going back to Blow by Blow, with a surprise opening of "Beck's Bolero" from his Jeff Beck Group rock years. A short rendition of Charles Mingus' "Goodbye Pork Pie Hat" that segues into a tense "Brush with the Blues" is a disc highlight, as it shows Beck pulling out many of his six-string tricks and taps into his blues background. "Space Boogie" gives drummer Colaiuta a chance to shine with double-speed licks, and affords keyboardist Rebello a spotlight for his jazz piano skills. But it's Beck who slams into the track with aggressive fluidity, shooting out sizzling solos as the band pushes him along. His sensitive cover of the Beatles' "A Day in the Life," a longtime live staple, is a show-stopper bringing Beck's intensity to an arrangement that has stops, starts, and unexpected turns and is, like the guitarist, never predictable. Through it all, Beck's guitar sings, cries, moans, and shouts with as much emotion as a vocalist, showing that an instrument can sing as effectively as a human being, but only in the right hands. Credits Nikkie Amouyal -- Package Design Jeff Beck -- Composer, Guitar Dick Beetham -- Mastering Terry Bozzio -- Composer Alan Branch -- Engineer, Mixing Billy Cobham -- Composer Vinnie Colaiuta -- Drums Rick Gould -- Cover Photo Jan Hammer -- Composer Tony Hymas -- Composer John Lennon -- Composer Paul McCartney -- Composer John McLaughlin -- Composer Charles Mingus -- Composer Charles Shaar Murray -- Liner Notes Jimmy Page -- Composer Simon Phillips -- Composer Jason Rebello -- Keyboards Nitin Sawhney -- Composer Tal Wilkenfeld -- Guitar (Bass) Stevie Wonder -- Composer User-contributed text is available under the Creative Commons By-SA License; additional terms may apply.